Flybe has gone into administration after struggling to raise funds amid a steep fall in bookings due to coronavirus.

One of Britain’s largest airlines, Flybe entered administration just after 3am on Thursday, with all flights grounded and the business having ceased trading “with immediate effect”.

It prompted pilots’ union Balpa to accuse the government and the airline’s owners of “betrayal and broken promises” – and questions about how vital regional transport links will be maintained.

The GMB union warned that, in addition to Flybe’s 2,400 staff, the collapse threatened 1,400 jobs in the supply chain and put the future of regional airports at risk.

Flybe had already come close to going under earlier this year – before last-ditch talks between the government and its owners secured a reprieve for the embattled carrier.

But since then, disagreements over the terms of a £100m taxpayer loan have cast a renewed shadow over its prospects – and a slide in bookings caused by the coronavirus outbreak was blamed for delivering a final blow from which it could not recover.

Hours before the official announcement of its collapse, Flybe boss Mark Anderson emailed the airline’s staff to say it was “shortly being put into administration” – pointing to the impact of the outbreak.

Flybe was the largest independent airline in Europe, carrying about eight million passengers a year between 81 airports in the UK and Europe. It had operated, under various guises, for more than 40 years.

Accountancy firm EY has been appointed to handle the administration process. 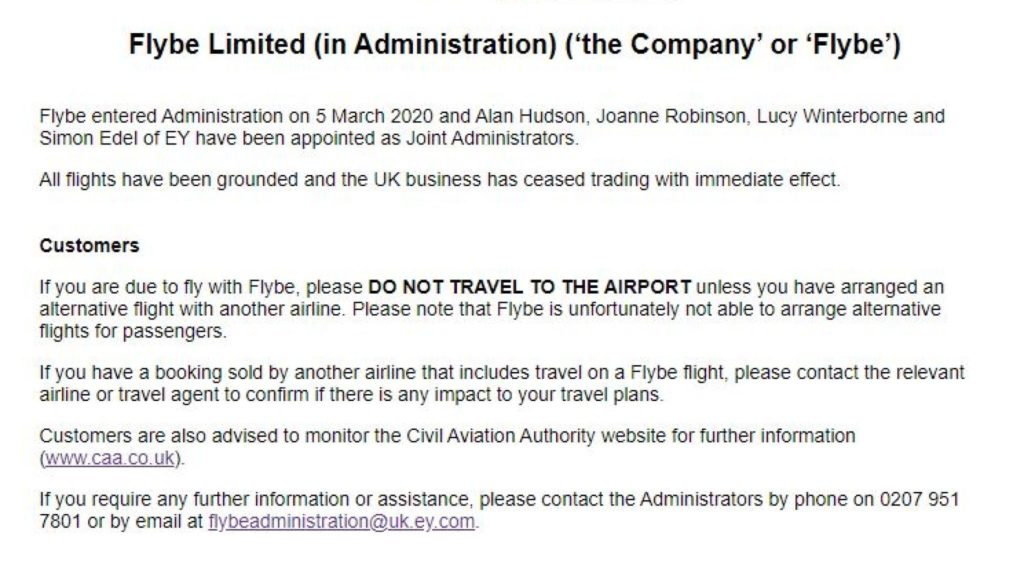 Alan Hudson, joint administrator, said: “Despite an agreement with the government to provide assistance to the company, added pressures on the travel industry in the last few weeks have further deepened the severity of its financial situation.

Passengers due to fly with the airline have been told to not travel to the airport unless an alternative flight with another airline has been booked.

“Flybe is unfortunately not able to arrange alternative flights for passengers,” a message on the airline’s former website said.

Staff on Wednesday’s final flights were said to be in tears ahead of the confirmation they had no jobs to go to a few hours later.

“We really tried to do everything we could back at the turn of the year but unfortunately though, with the situation that’s developed with coronavirus, an already weak company just hasn’t been able to survive,” he said.

He said the government has been speaking to regional airports around the UK and working with other airlines to “try to make sure we get those routes filled just as quickly as possible” after airports expressed concerns they would have few flights left without Flybe.

He noted that while the collapse of Thomas Cook last September meant the UK’s biggest ever peacetime repatriation, Flybe’s routes are largely domestic and not many Flybe customers are abroad at this time of year. Those who are will be given assistance by other airlines, he said.

The airline was owned by Connect Airways, a consortium made up of US hedge fund Cyrus Capital, Virgin Atlantic and infrastructure group Stobart.

Stobart said in an update to investors hours after the collapse that Flybe had “shown promising signs of a turnaround” despite delays to European Commission clearance to Connect’s takeover of the carrier last year. 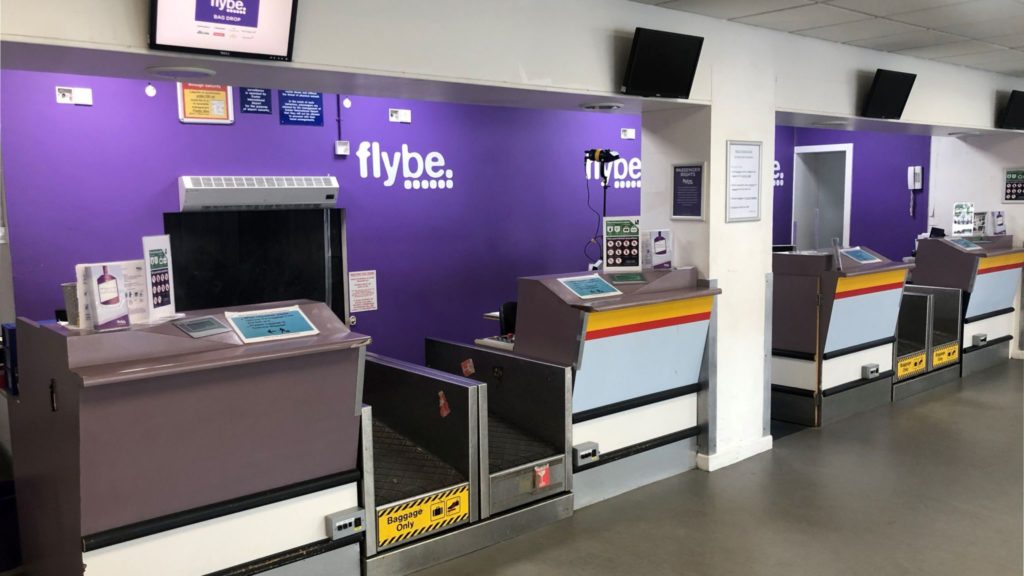 “However, despite the best efforts of all, not least the Flybe people, the impact of COVID-19 on Flybe’s trading means that the consortium can no longer commit to continued financial support,” he said.

Stobart said that over the past 14 months, Connect had invested more than £135m to keep the airline flying, including £25m of the £30m committed as part of its most recent rescue deal in January.

In the final hours of Wednesday, Flybe’s website stopped working, just showing an error message which said the link is “no longer live”.

Flybe planes at airports including Edinburgh were not being refuelled and engineers were being laid off.

The company had made a renewed plea for ministers to provide emergency financial support after the company’s already fragile situation was made worse by a “collapse” in bookings due to coronavirus, one insider said.

Andy McDonald, Labour’s shadow transport secretary, said the collapse was “disastrous” for passengers and employees and would cause “real anxiety”.

“Flybe has provided critical connectivity for many locations throughout the country especially where there is currently no realistic transport alternative other than flying,” he said.

“The government has to answer how those vital links will be maintained following Flybe’s collapse.”

Brian Strutton, general secretary of the British Airline Pilots Association (Balpa), said the airline’s owners, who took over a year ago, and the government “connived to walk away” and accused other airlines of going “out of their way to push Flybe over the brink”.

“Flybe staff will feel disgusted at this betrayal and these broken promises,” he said.

Oliver Richardson, national officer for union Unite, said its members “and the entire staff at Flybe” will be feeling angry and confused” about how the airline was allowed to collapse.

He said it was “outrageous” the government had not learnt from the collapse of Monarch and Thomas Cook.

Flybe boss Mr Anderson’s letter warning staff added: “It’s with enormous sadness and a deep feeling of sorrow that I share the upsetting news that Flybe is shortly being put into administration.

“Despite every effort, we now have no alternative – having failed to find a feasible solution to allow us to keep trading.

“While our shareholders and the leadership team have worked with the government and key suppliers to try to get the funding and support needed, this has not materialised.

“The coronavirus has impacted both our shareholders and ourselves and has put additional pressure on an already difficult situation.

“I am very sorry that we have not been able to secure the funding needed to continue to deliver our turnaround plan.”

Mr Anderson, who had only been chief executive for eight months, apologised to staff, saying he appreciates “how distressing this news is and the shock and numbness that you will be feeling”.

Flybe is said to have requested government support in recent days, to mitigate the impact of COVID-19.

But the crisis around the virus came after the company had already asked for a state loan, which appeared to have been rejected.