Video cameras connected via cellular networks have traditionally been rather uncommon mainly due to requirements on bandwidth and reliability. Berg Insight estimates that only about 2 percent of the installed base of connected video cameras today use cellular technology. With the introduction of 5G networks, which is currently being rolled out across Europe and North America, the number of video cameras featuring cellular connectivity is anticipated to grow fast. Berg Insight forecasts that the installed base of video cameras featuring cellular connectivity will grow at a CAGR of 40.7 percent from 3.7 million units 2019 to 20.4 million units in 2024. 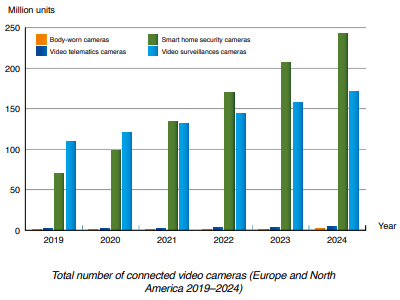 5G communications technology will have a major impact on all the video camera segments covered in this study and will result in a range of new use cases as well. Video surveillance systems will now be possible to install at remote or difficult locations. Body-worn cameras can provide police officers and other workers in the field with real-time data that are crucial for operations.

“Video is anticipated to become one of the early volume 5G IoT connectivity use cases”, says Martin Backman, IoT Analyst at Berg Insight. He adds that video camera vendors are now ramping up their efforts to offer a range of 5G video cameras in the near future.

“The market potential for all connected video camera segments is huge as new breakthrough technologies such as artificial intelligence and facial recognition are adopted on a wider scale.”

IoT in Action Virtual Learning:
Register now to get access to a collection of online training resources that showcase how companies are being purposeful in their use of IoT across different industries and business use cases.