Swimming pools and gyms in England could reopen in July, the business secretary has announced as it emerged that drinkers who fail to socially distance in pubs could be fined by the police.

Alok Sharma said he hoped that leisure centres and indoor gyms would be able to reopen later next month as the government published hundreds of pages of guidance before reopening big sectors of the economy on July 4.

The bulk of England’s hospitality, leisure and tourism industries will be able to restart from July 4 as the coronavirus infection rate continues to fall. Pubs, restaurants, hairdressers and cinemas can open if they are deemed to be safe.

To allow them to operate, Boris Johnson has announced that the two-metre social distancing rule will be replaced by a new “one-metre plus” rule, insisting that mitigations such as face coverings gave a “broadly equivalent” protection at the shorter distance.

Professor John Edmunds, an epidemiologist at the London School of Hygiene & Tropical Medicine who attends Scientific Advisory Group for Emergencies (Sage) meetings, said the government’s switch to “one metre-plus” restrictions could cause an increase in the transmission rate of the coronavirus.

“The easements that are coming are going to have a double effect really because we are going to be allowed to go to pubs and restaurants and so on, and so that will increase our number of contacts,” he told Today on BBC Radio 4. “The easement of the restriction on two metres and allowing people to meet inside is also going to change the nature of the contact to be slightly more risky, so it is likely to have a double effect.

“There is a risk that transmission will take off again, so we have to be really vigilant, and this is where the test and trace system needs to be really working well to make sure we can stamp out any infections that occur.”

The new guidance published by the government and industry gives a glimpse of life under the “new normal” from July 4.

Pubs have been advised to tell customers who fail to observe social distancing rules that they could be evicted by the police and fined. “Where necessary, informing customers that police and the local authorities have the powers to enforce requirements in relation to social distancing and may instruct customers to disperse, leave an area, issue a fixed penalty notice or take further enforcement action,” it says. 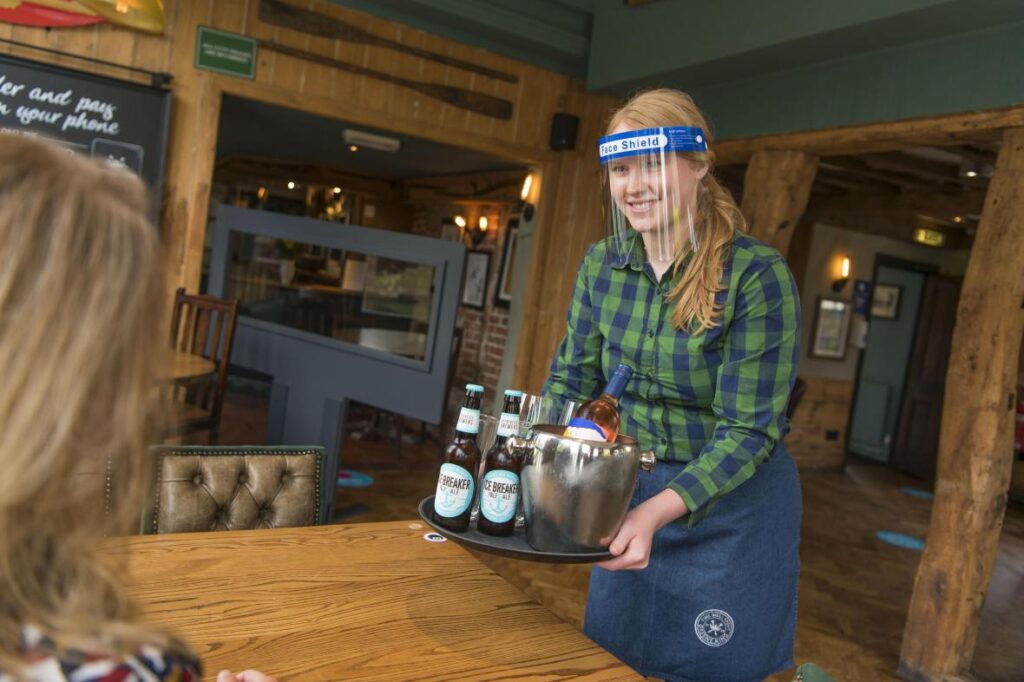 Police have warned that reopening pubs and bars could cause a surge in “drunken and irresponsible behaviour” because the government has allowed a “head of steam” to build up.

John Apter, head of the police federation, said: “The announcement of this easing of lockdown has been done in such a way that a head of steam will be gathering between now and the 4th July which could be seen by some as a countdown to party time, which is not accurate and certainly not the message we want to send.

“This leads to issues that the police will have to deal with. Firstly, of course, there are worries about alcohol consumption leading to drunken and irresponsible behaviour. There’s also the concern that people who can’t get into pubs because of restrictions that are still in place may cause conflict.

“This will, without doubt, add more pressure on policing, paramedics and the wider NHS.”

He urged the public to be “responsible and sensible”.

Although the police will not have specific powers to fine small groups of people who refuse to socially distance they do have public order powers they could use to ask people to leave premises. They will also be given specific new powers to break up “large and irresponsible” gatherings in England.

Mr Johnson’s spokesman said although many of the rules and regulations would become guidance, some enforcement powers would remain. “What the police will be able to do is break up large and irresponsible gatherings of over 30 people,” he said.

“Police can also continue to enforce the wearing of face coverings on public transport. Other regulations that remain are to help enforce that people arriving in the UK quarantine for 14 days and also the powers the authorities have to detain someone considered a public health risk.

“If you have a very big gathering taking place in a park or the sort of raves we have seen taking place in parts of the country in recent weeks, police would have the power to break those up.”

The spokesman added that local authorities would also have the power to impose fines or temporarily close businesses that failed to follow health and safety rules.

Pubs will be required to take the contact details of all drinkers and keep them for three weeks to help support the government’s test-and-trace scheme in the event that anyone becomes ill.

The number of people allowed into pubs will be limited to ensure that social distancing rules are observed, with customers seated indoors advised to stay at their tables. They will be encouraged to order drinks and food on apps to reduce contact with staff.

Live music or performance is banned, along with singing and dancing. Venues have also been told to ensure that people do not have to raise their voices to speak to others to reduce the risk of infection. That includes refraining from playing music or broadcasts that may encourage people to talk loudly.

Restaurants will only admit people who have reservations, and tables will have to be socially distanced. Napkins and cutlery will only be brought out with food.

In hotels, beds and breakfasts, hostels and campsites, people will have to wear masks when they go through corridors. Shared kitchens and TV lounges will be closed.

The guidance for hairdressers states that they will have to wear full-face clear visors extending below their chin. Customers will not be offered any refreshments or magazines to read, and they will only be allowed to get their hair cut if they have an appointment. The national hair and beauty federation has said that small talk should be kept to a minimum.

Mr Sharma said protections are in place for staff who feel unsafe while working under the new “one metre-plus” restrictions when pubs and restaurants open again next month.

Mr Sharma added: “If people are ignoring the rules and they are not keeping a workplace safe, then there are clearly measures that can be followed and it is possible for there to be enforcement notices, there are going to be checks that are carried out, spot checks by the Health and Safety Executive, which they are already doing.

“And in the case where someone is not following an enforcement order and not fixing things in a workplace, then, for the most serious offences, people can go to prison for up to two years.

“These are real powers and real teeth that are in place.”

The threat to fine people who fail to socially distance appears to contradict the approach set out by the prime minister yesterday.

Mr Johnson told the Commons that from now on people will be asked to follow guidance rather than an approach enforced by legislation.

“Our principle is to trust the British public to use their common sense in the full knowledge of the risk,” he said.