The failure of Europe’s biggest regional airline Flybe could be the start of more casualties, analysts predict.

On Thursday, a global airline industry body warned the financial hit from coronavirus could reach $113bn (£87bn) this year.

The bleak prediction came on the same day UK-based Flybe went into administration.

Flybe’s collapse “will likely be the first of many in 2020,” said James Goodall, transport analyst at Redburn.

“We expect that the demand destruction caused by Covid-19 accelerated its demise and we believe further airline bankruptcies should be expected in the coming months.”

Airlines could lose $63bn to $113bn in revenue from the slump in passenger traffic globally this year, the International Air Transport Association (IATA) said on Thursday. Last month, it had predicted losses of $29bn.

Demand has plummeted, not just from holidaymakers, but from corporate travel as firms restrict business trips for employees and conferences are postponed.

“There will be a significant increase in airline casualties in this scenario,” said Michael Duff, managing director at The Airline Analyst.

Mr Duff singled out a handful of airlines based in China, Hong Kong, Thailand, South Korea, Norway and Mexico that rate very low on his firm’s financial strength index.

“This is a very difficult time for the airline industry and it will be about conserving cash,” said Greg Waldron, Asia managing editor of Flightglobal magazine.

“It will be a very challenging time for those airlines who don’t have a lot of cash, especially those that have been involved in a price war.”

Analysts said regional airlines in Asia were more vulnerable as they rely heavily on passengers from China, the epicentre of the coronavirus outbreak. “They also have some of the largest aircraft order backlogs so we can expect some pressure on Airbus and Boeing to delay deliveries and to refund aircraft deposits,” added Mr Duff.

Many airlines have introduced cost-cutting measures such as asking staff to take unpaid leave and pay cuts as planes are grounded. 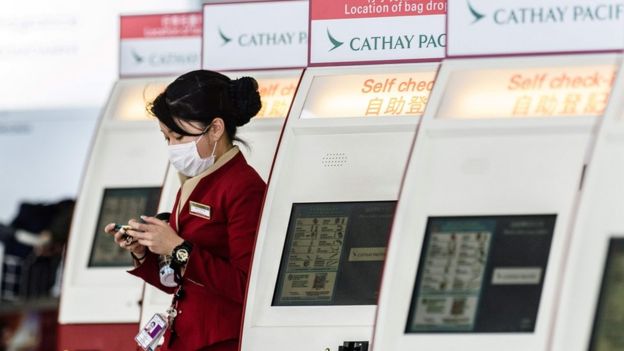 Emirates has asked workers to take unpaid leave for up to one month, while Cathay Pacific asked staff to take three weeks of unpaid leave.

Regional airline Flybe went into administration on Thursday after a bid for fresh funding failed.

Paul Charles, a former director of Virgin Atlantic, told the BBC’s Today programme that he expected “other casualties” due to pressures such as the coronavirus.

“Management teams at airlines at the moment are entirely stretched because of coronavirus. You’re not going to see anyone else come in and try and replenish the network or fill the void left by Flybe.”

Scottish airline Loganair has said it will take on 16 former Flybe routes.

But Mr Charles said: “What Loganair is doing is cherry-picking the best routes, which does make sense, but I wonder how long it’s going to last – I do think some of those 16 won’t survive for several months.”

However, Logair chief executive Jonathan Hinkles said he disagreed, and that other airlines would buy some of the routes. “I’m aware from friends and former colleagues in the Channel Islands that they’ll be stepping up today to announce some former Flybe routes as well.

“I think airlines will be stepping up where it makes sense.”