The transport secretary, Grant Shapps, has said that moving beyond the coronavirus pandemic will be a “gradual process, not a single leap to freedom” as he announced a £2bn package to support cycling and walking.

The prime minister is expected to announce only very modest changes in detailing his “roadmap” for easing the lockdown in his televised address on Sunday evening, but there are concerns that mixed messaging has prompted the public to head outside.

Warning that it will take some time for things to get back to normal, Shapps said: “Moving beyond Covid will be a gradual process, not a single leap to freedom, so when we do emerge the world will seem quite different.”

He said the government will proceed with “extreme caution” in easing the lockdown as he urged the public not to “throw away” their hard work by going outside.

Shapps said it would be “absolutely tragic” if people damaged the success social distancing has had on tackling coronavirus by leaving home to enjoy the warm weather.

His warning came after police warned they were “fighting a losing battle” as Londoners headed to parks and beachgoers descended on Brighton’s beaches. 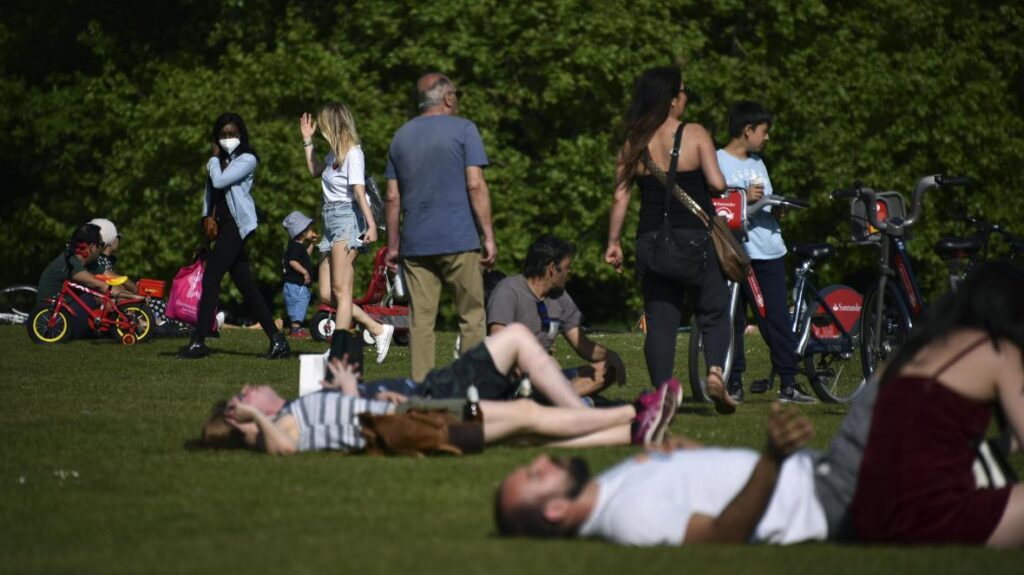 Officers in Hackney east London, said groups were gathering in the borough’s parks to have “pizzas, beers, wines”, despite social distancing rules and calls from the government for people to stay at home this weekend.

It comes after the Coastguard said that Friday had been its busiest day since lockdown began, with more than double the number of call-outs compared with the average day last month.

Speaking at the Downing Street press conference, Shapps said: “It’s vital that we don’t throw away essentially the great work of seven weeks of people respecting very impressively the rules and the guidelines by throwing it away because it happens to be sunny outside this weekend, that would be absolutely tragic.”

“Extreme caution is actually the watchword on this,” Shapps added.

The development comes as it was revealed that the number of daily tests for the coronavirus fell below health secretary Matt Hancock’s 100,000 target for a seventh day in a row.

The latest figures from the Department of Health show that by 5pm on Friday, a total of 31,587 people had died in hospitals, care homes and the wider community after testing positive for the coronavirus, up by 346 from 31,241 the day before.

As commuters face new challenges in getting to work during the coronavirus crisis, Shapps unveiled what he described as an “ambitious” programme for the transport network.

The programme will be published in early June with the aim of doubling cycling and increasing walking to work by 2025.

Shapps said it was likely that commuting habits using public transport would be changed dramatically due to the impact of Covid-19.

He said: “While it’s crucial that we stay at home, when the country does get back to work we need to ask those people to carry on cycling or walking and for them to be joined by many others as well.”

Measures will include pop-up bike lanes and wider pavements as well as cycle and bus-only streets.

Shapps said even if the transport network was running at full capacity, the two-metre social distancing rule would cut capacity to one in 10.

He said “getting Britain moving again while not overcrowding our transport network” would require many people to think about how and when they travel.

Responding to the announcement, Sadiq Khan, the mayor of London, said: “I am determined that clean, green and sustainable travel must be at the heart of London’s recovery from Covid-19, so I am very pleased that the government has announced significant funding for walking and cycling schemes.”